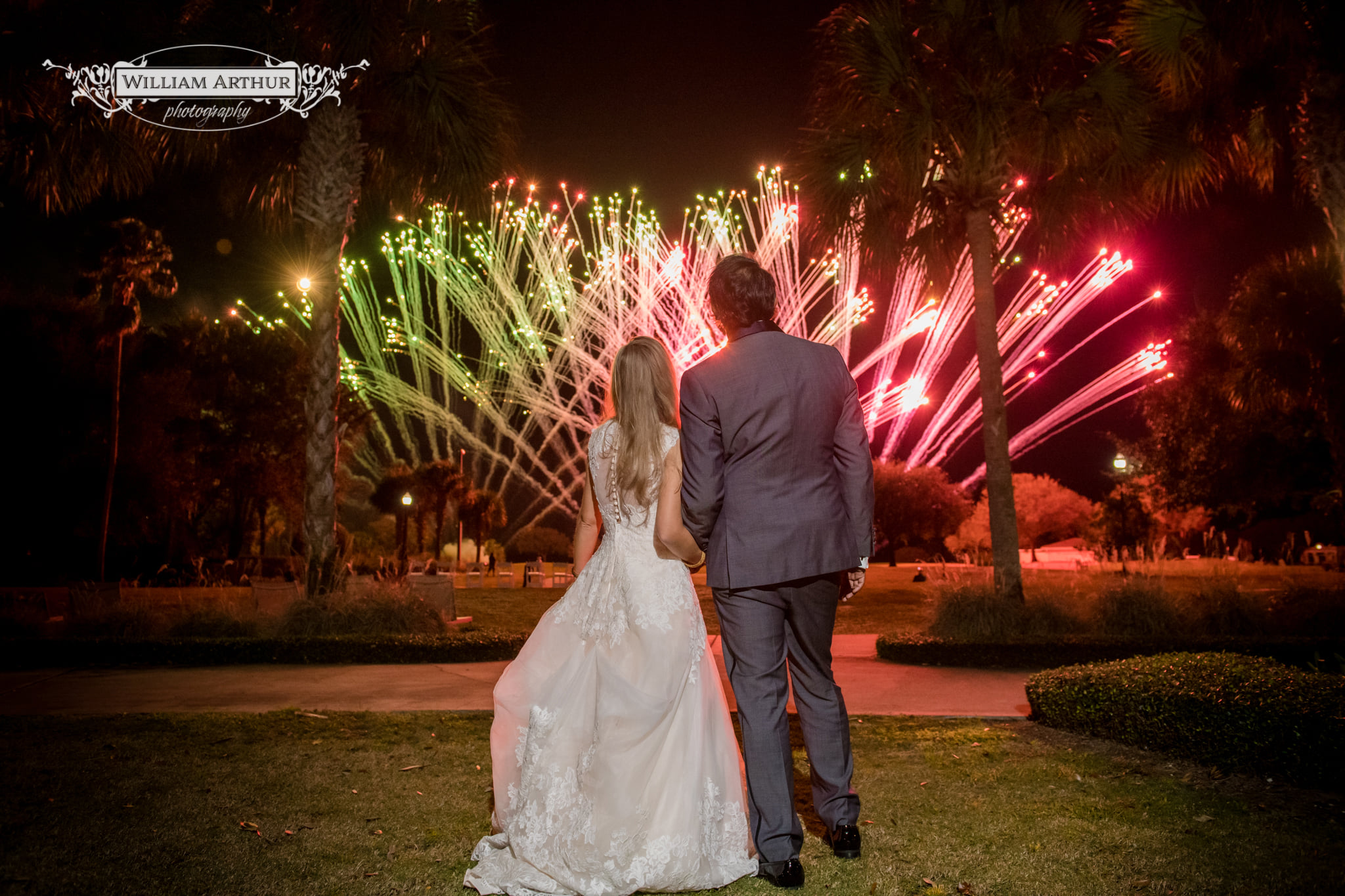 A spectucular fireworks display surprised guests at the Omni wedding of Brooke and Antony on Jan. 9, 2021. The 110 guests were led outside for cake cutting. As soon as the bride and groom cut the cake, the fireworks exploded. The awesome display, by Xtreme Special FX, lasted about 6 minutes.

The bride and groom were married in the rotunda at the Omni Orlando Resort at ChampionsGate. Live musicians provided the ceremony and cocktail music.

When the National Ballroom doors opened for the wedding reception, guests were greated by a dimly lit ballroom with blue LED Wall Lighting by us, Soundwave Entertainment. We also pinspotted the tall floral centerpieces to illuminate their beauty. The focal point was the sweetheart table with lavish floral and draping. We lit up the draping with a mix of blue and white lighting.

After the introductions, the Orlando newlyweds danced their first dance, followed by the parent dances and toasts. During the meal, guests enjoyed an aerialist performance, by Aerial Dragons Entertainment, another surprise the bride and groom planned for their guests.

The last hour and a half of the reception guests danced to a wide range of dance hits from the ’70s to current pop songs supplied by Soundwave Owner DJ Les Kopasz. 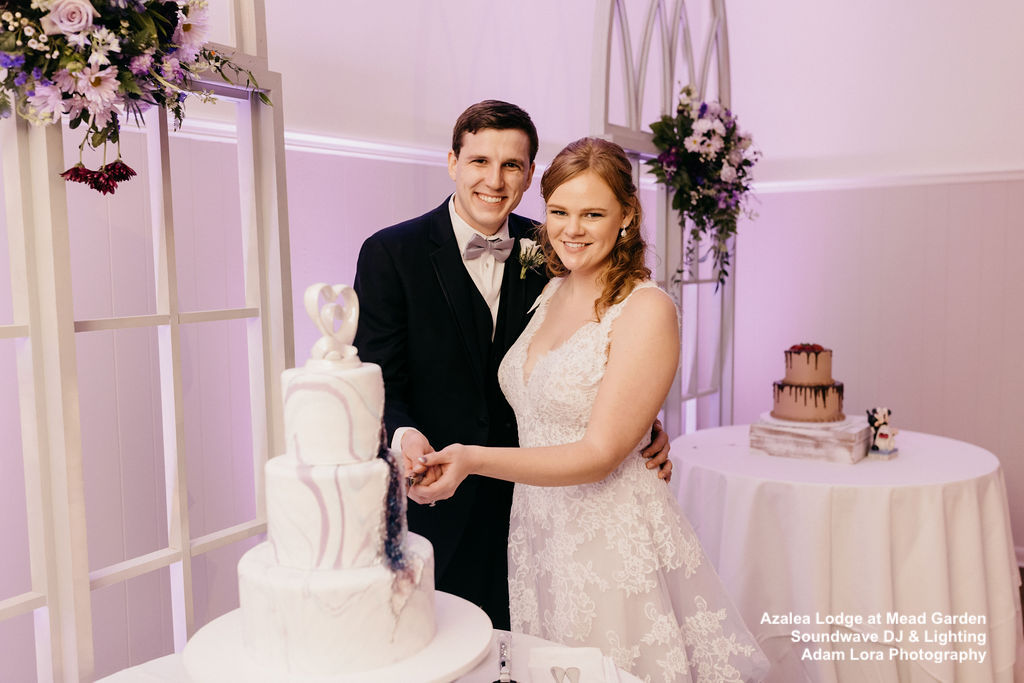 The garden inspired wedding of Christa and Grant took place at Azalea Lodge at Mead Garden. Azalea Lodge was recently awarded to Dubsdread Catering. Dubsdread manages the provide and is the exclusive caterer.

The newlyweds chose a quiant ceremony space in the middle of the Mead Garden to host their ceremony. The bride’s father, Reverend John, escorted his daughter down the aisle and officiated. Ocean Hawk Rentals and Orlando Wedding and Party Rentals provided seating and decor for the ceremony and reception.

After the ceremony, guests enjoyed a brief walk through the park to Azalea Lodge. The festivities continued with cocktail hour on the patio and dinner and dancing in the ballroom. DJ Les, owner and head DJ of Soundwave Entertainment, celebrated with the newlyweds and their 55 family and friends. Our soft purple LED Wall Uplighted provided just the perfect ambiance for the garden theme. 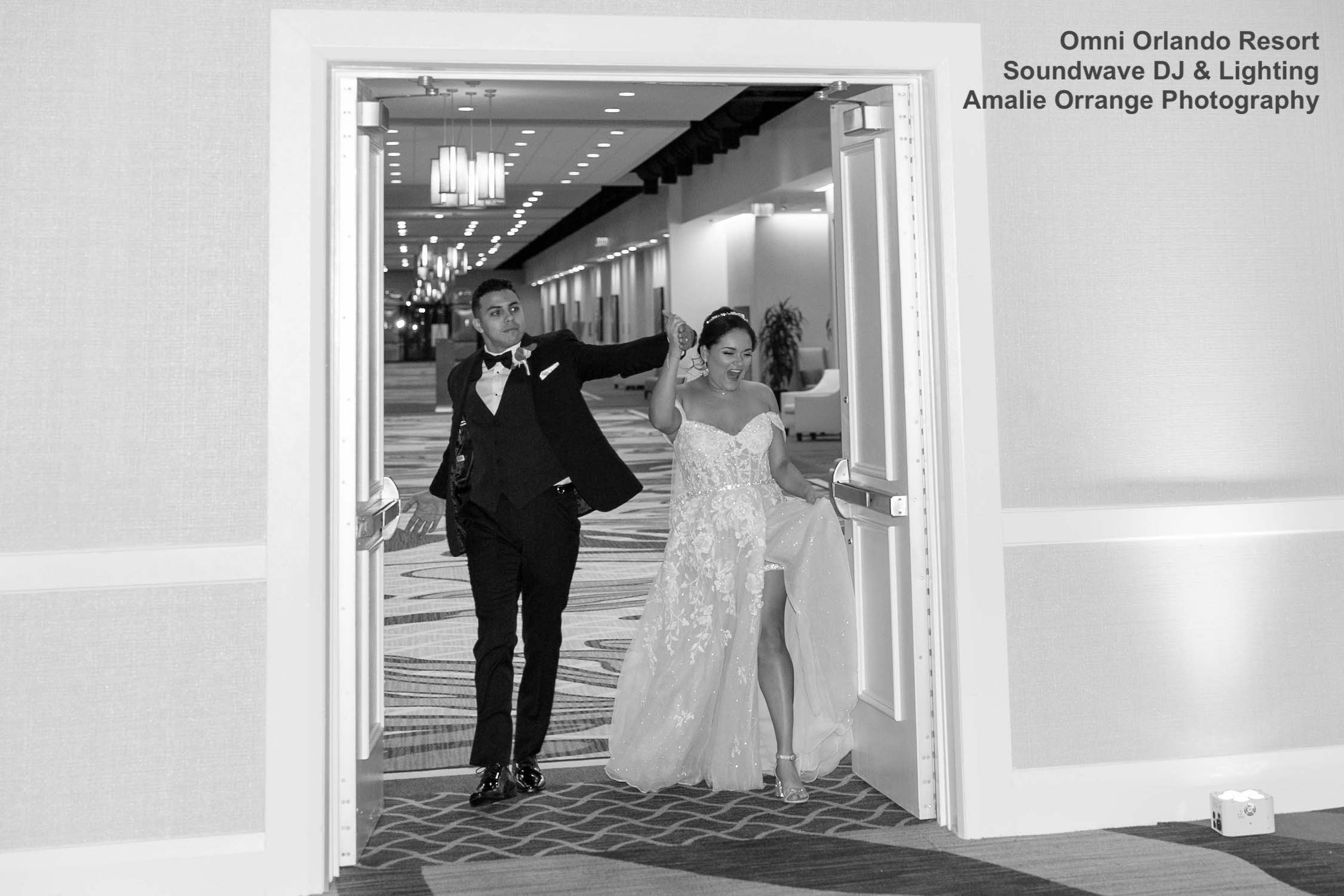 The soft purple wedding of Raquel and Marc took place at the Omni Orlando Resort at ChampionsGate on December 27, 2020 on a beautiful sunny afternoon. The couple was joined by 100 family and friends.

The bride and groom hired DJ Ray Vales of Soundwave to provide a mix of Latin and American music. DJ Ray provided announcements in English and Spanish.

The Grand Salon Terrace hosted the outdoor ceremony and cocktail hour. Dinner and dancing took place in the ballroom. We love the ballroom’s crystal floral chandelier that centers the dance floor.

The Omni, just 10 minutes from Walt Disney World, is surrounded by 36 holes of championship golf and 15 acres of recreation. The resort offers a signature full-service spa, sparkling pools and a lazy river, making it the perfect getaway hotel for adults and children. 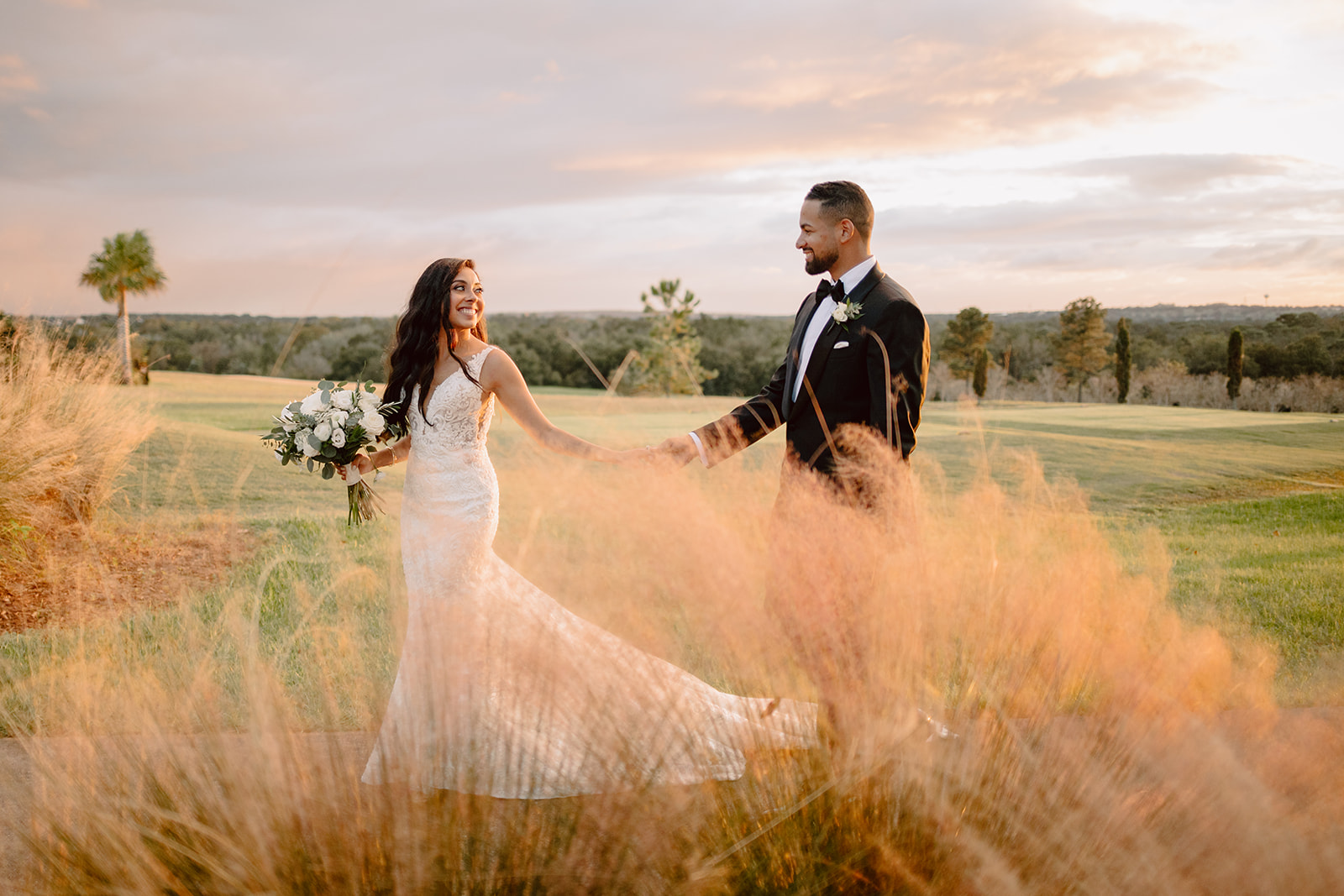 The Orlando bride and groom chose Soundwave’s Luxury All Inclusive Package that combined DJ and emcee services, and extensive LED Lighting Design. Soundwave provided 30 Wall Uplights in a warm candle light glow throughout the ballroom and foyer. Soundwave also provided designer DJ front board to match the Bella Collina bar, 20 pinspots to illuminate the cake and centerpieces, dance lights, and mini moving heads for extra effects during the dance party.

New Years Day was the wedding celebration of Jillian and Zachary at Dubsdread. Soundwave Entertainment DJs met Jillian and her mom at an Orlando Wedding Show and they instantly connected with Soundwave DJ Justin Coulter. The next day, the Soundwave contract was signed for DJ and Lighting Design and the 10 month wedding planning process began!

The New Years Day wedding ceremony took place as the sun was going down at 5:30pm under the magnificant Oak tree and glowing market lights. The beautiful Dubsdread golf course provides a beautiful backdrop. The ceremony was officiated by the bride’s cousin.

Cocktail hour was both outside and inside the Florida Ballroom which was decorated for Christmas. Family and friends then celebrated the reception in the Dubsdread Ballroom. The ballroom is known for its rustic charm and vintage elegance with wood beams wrapped in twinkle lights and stone fireplace. 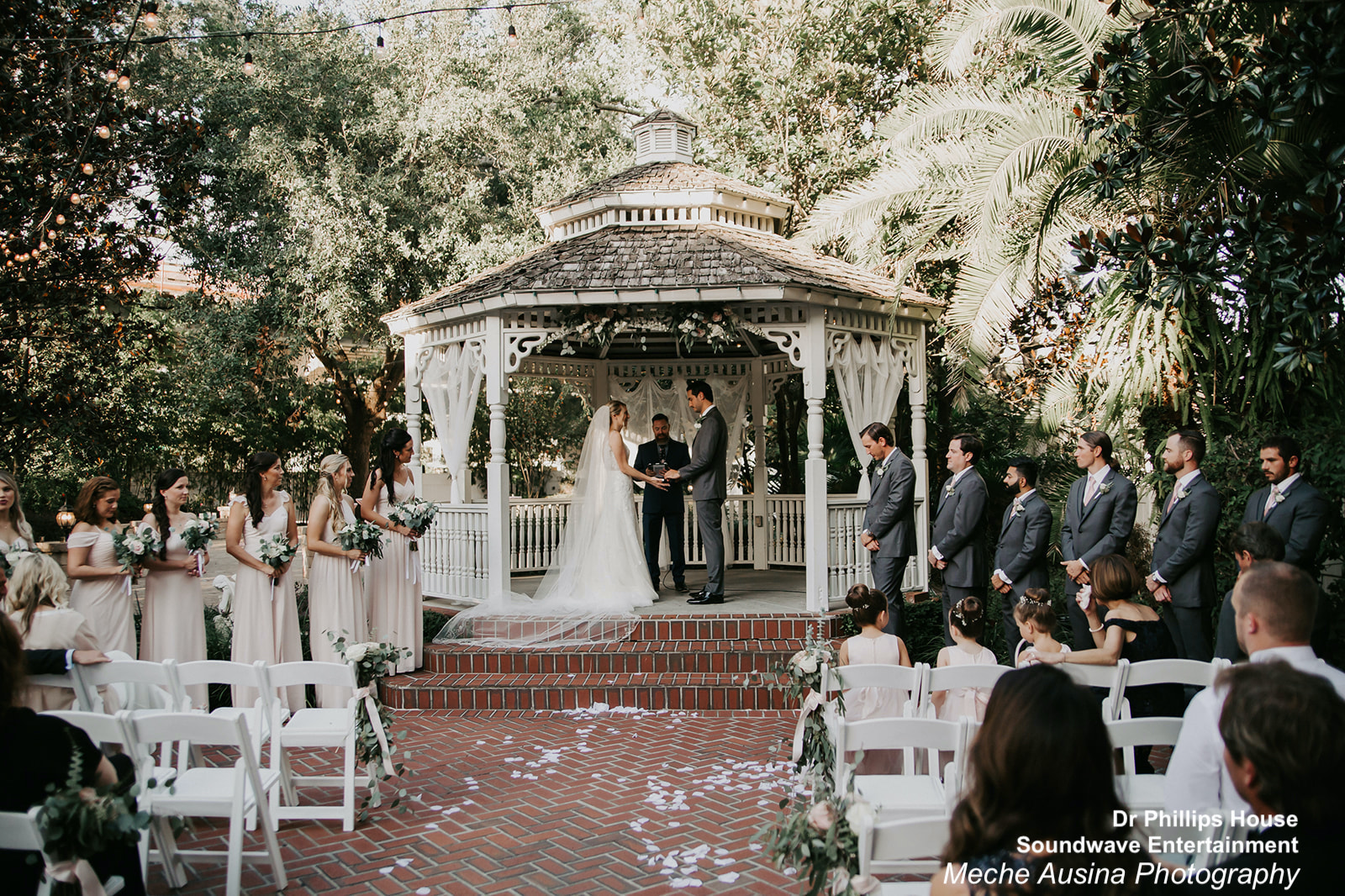 The Dr. Phillips House located in Downtown Orlando is a popular Orlando wedding venue for stunning garden weddings. The Victoria home turned venue is owned by Millenia Catering, Chef Lo. The home features elegant furnishings that create a classic setting. Wedding guests will be in awe of the lush gardens where the garden wedding ceremony takes place at gazebo. Market lights provide the perfect backdrop for dancing under the stars when its time to party.

Matt and Taylor celebrated their Nov. 15, 2020, wedding with 75 guests at the Dr. Phillips House on a gorgeous Orlando fall evening. Soundwave DJ David celebrated with the couple as guests danced under the stars and market lights. Soundwave Entertainment also provided photo booth. 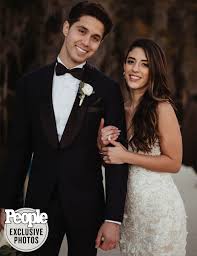 AS WRITTEN IN PEOPLE MAGAZINE…

Party of Five star Brandon Larracuente has tied the knot!

The actor wed his longtime girlfriend, Jazmin Garcia, in an “intimate and magical” ceremony on Dec. 8, PEOPLE exclusively confirms.

The couple, who got engaged in November 2019 after nearly four years of dating, said “I do” at Paradise Cove in Orlando, Florida.

“We are on cloud nine,” Larracuente, who also starred on 13 Reasons Why and Bloodline, tells PEOPLE of being a newlywed.

“It feels like a dream,” adds his bride. “Someone’s gonna pinch us and we’re gonna wake up.”

Though they had to adjust their ceremony due to the ongoing coronavirus pandemic — Larracuente and Garcia, both 26, say they feel lucky to have gotten married among their “closest family and friends.”

Garcia says that planning a wedding during a pandemic was “very stressful and anxiety-ridden,” but as she walked down the aisle to Ed Sheeran’s “Perfect,” those worries melted away.

“When I saw him, I couldn’t hear the music anymore. All I saw was him. It was the craziest tunnel vision and I haven’t experienced that since I met him when we were 17,” she recalls. “I realized that this was the beginning of forever and that moment will always be special to me.”

Larracuente was similarly overwhelmed by emotion — despite his best intentions to “hold in” his tears.

“The minute I looked up when I saw her down the aisle, I just burst out in tears,” he admits. “It was a lot of emotions at once and it was a moment I’ll never forget.”

He adds: “2020 has been a tough year for us and for everybody else. I think this is what we needed — to reset and just let loose for one night.”

Their intimate wedding lived up to the couple’s expectations of being a “dreamland,” complete with twinkling lights and a chandelier.

The space also included a ceiling made of 1,200 fresh flowers that “took everybody’s breath away,” Garcia says. They even found a way to do some good with their decor, donating the flowers to a local hospital following the reception.

Larracuente and Garcia first met at a Halloween party when they were just 17 — Larracuente dressed as a Chippendale and Garcia as a Playboy Bunny. Though they didn’t begin dating right away, they became friends and made the relationship official about four years later.

“We’ve definitely gone through the ups and downs together, and I think that’s why we are here,” Larracuente says. 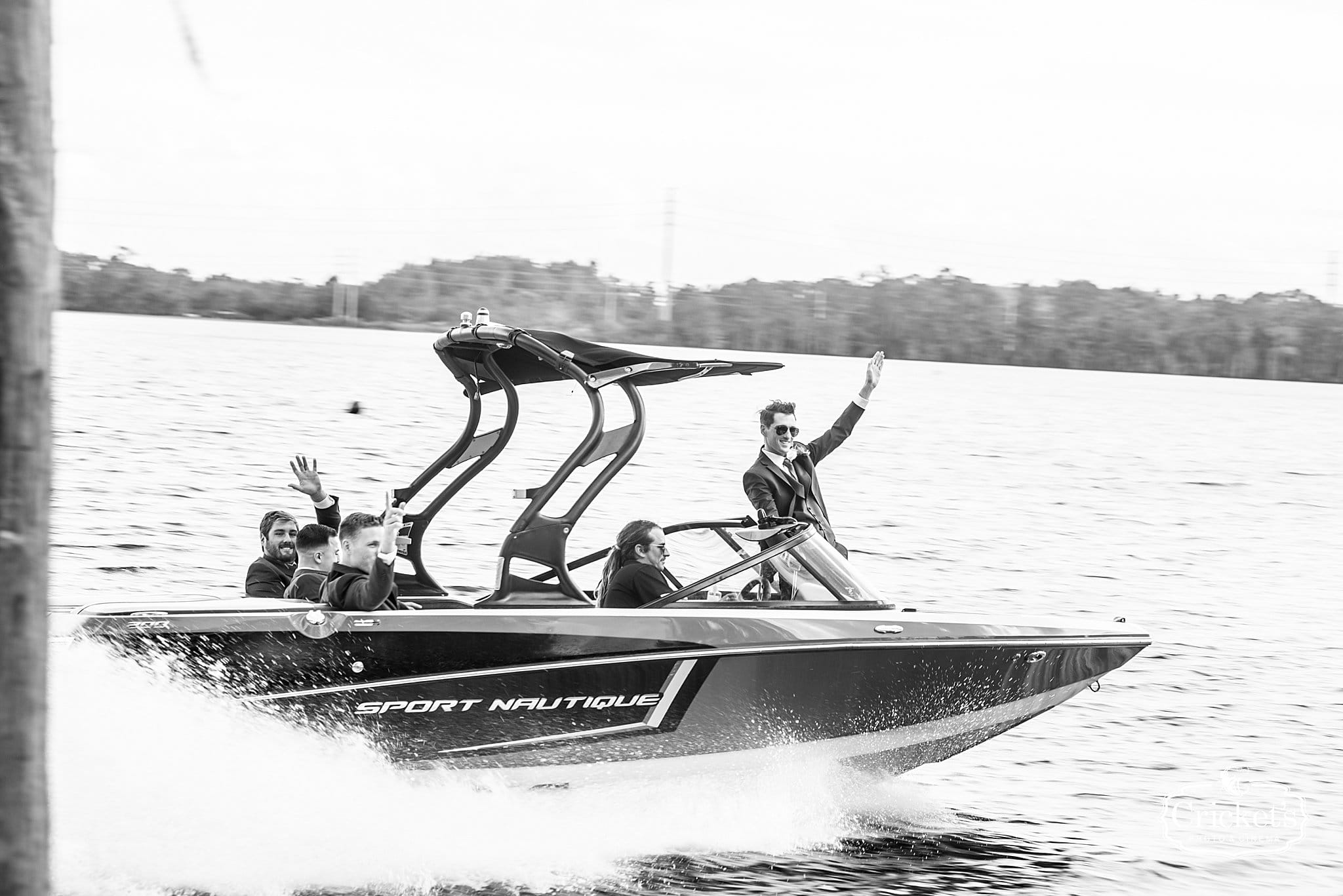 Paradise Cove is tucked away in a private corner of Lake Buena Vista. A stone’s throw away from Disney Springs, Paradise Cove is an idyllic oasis on the shores of Lake Bryan. Twinkling lights and tiki torches add to the magical glow of this secluded paradise. Rainbow hued Adirondack chairs, a palm thatched cabana and sandy beach lend an island vibe to the setting. Paradise Cove will customize a wedding to fit your vision and your budget. 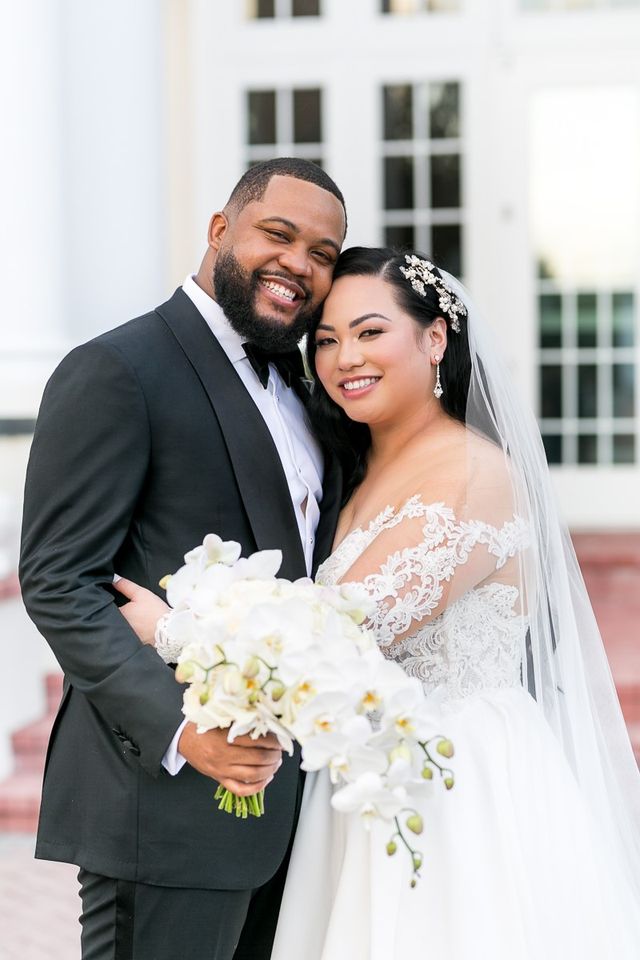 Crystal and Turrell hosted their wedding November 1, 2020, at the Luxmore Grande Estate, located in Winter Springs, Florida. The Luxmore Grande Estate is privately owned by RW Events and Big City Catering. The estate was initially built as a private residence in 2001. Purchased by the new owners in 2014, Luxmore Grande Estate was converted to a chic and luxurious southern estate. The 20,543 square foot estate is ideal for weddings, anniversary parties, corporate meetings and social gatherings. The Estate has four distinctive rooms and an exterior oasis: The Grande Ballroom, The Lux Parlor, The Estate Room, Jesup Garden and Patio, and The Lux VIP Suite. 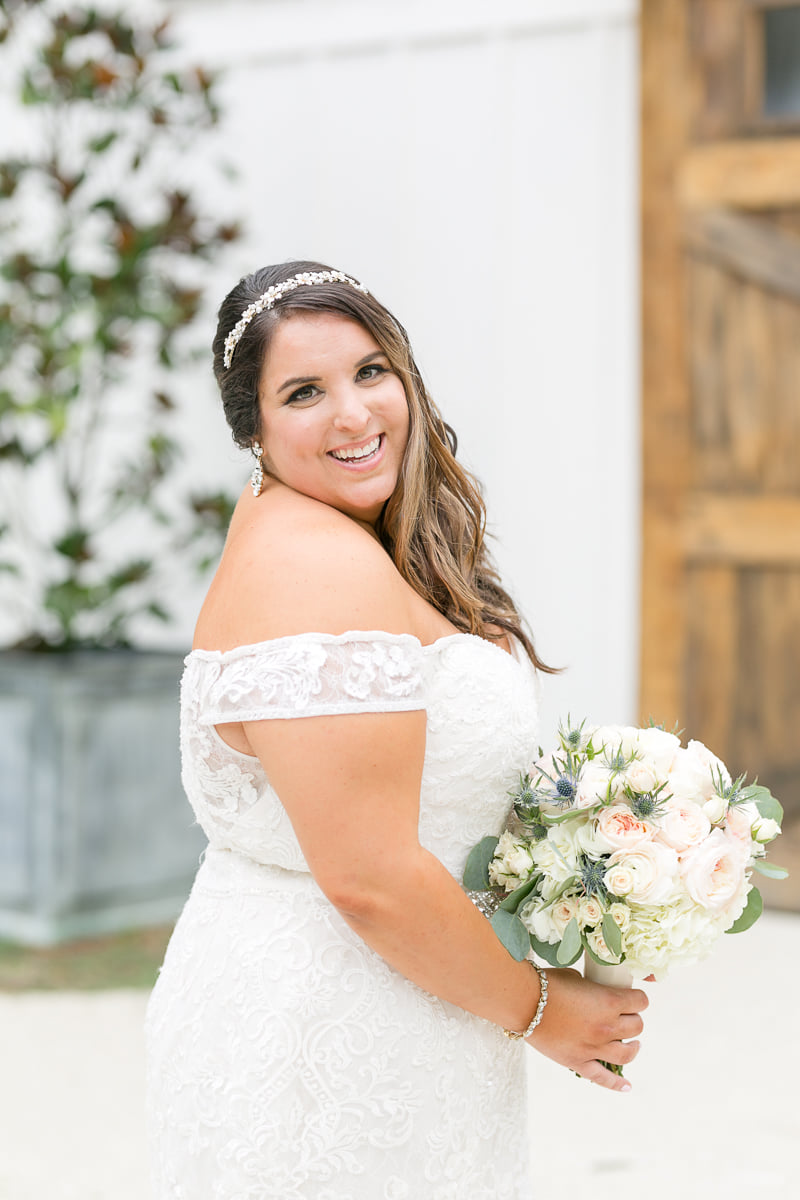 The Mulberry at New Smyrna is a traditional style white barn with a modern twist, created with many weddings in mind. The Mulberry perfectly blends rustic features with southern elegance. Jessica and Kyle Mariacher built this barn for their wedding and were the first ones to get married here, a lot of love and thought out details went into the design of the Mulberry.

The 6,000 square feet of space is wide open with great views of the giant oaks and property through the windows, bar and patio area. The event space has many wonderful details that are unique to only this venue. The two 22 foot live edge wood bars are made out of trees that fell on the property during hurricane Matthew. The massive barn doors are original wood from an old apple orchard barn in Indiana, built in the 1850’s. There is also a farmhouse that used to be part of a working farm on the property. The house has been renovated with updated appliances and furnishings, keeping a touch of French country feel.